The University of Nairobi Deputy Vice Chancellor in charge of Academic Affairs Professor Julius Ogeng’o said the matter is under investigation, after receiving Mutinda’s confession, saying proper action will be taken.

Kenya’s Ambassador to Uganda Kiema Kilonzo has been exposed as an academic fraudster by his onetime Personal Assistant (PA) who has come out with shocking revelations.

According to an affidavit by Johnson Uvale Mutinda who served as Kilonzo’s PA, the ambassador did not attend any classes for his master’s degree in Armed Conflict and Peace Studies.

Mutinda said his certificate is an academic fraud of monumental scale.

The former PA revealed that it was him who attended all the classes at the University of Nairobi on behalf of his boss.

Mutinda said he agreed to this criminal affair out of pressure and coercion from his boss who threatened to sack him if he did not take up the extra duties as assigned.

According to Mutinda, his boss who was then serving a second term as the Member of Parliament for Mutitu Constituency in Kitui county assigned him “extra duties” of attending classes at UoN’s department of History in the evening.

Fearing to lose his job, the former PA complied until the time Kilonzo graduated and was awarded the ‘fake master’s certificate’

To facilitate his smooth attendance of classes at UoN without any detection by the University security, Mutinda claims that his boss provided him with two identity cards: a National ID as well as a Student ID.

Curiously, both IDs, which copies have been availed to Hot News bear the name of the ambassador but a photograph of his former PA.

It is not clear how the two IDs were procured to facilitate the academic fraud that would bring the University of Nairobi to serious disrepute.

The fake National ID which Mutinda keeps to date had the Ambassador’s details including ID number 9146003, date of birth 1966 but the photo was his (the PA) to masquerade as a student registered for that course.

Mutinda says that when he raised concerns that he was not best suited to masquerade as the former MP and attend classes on his behalf, his boss allegedly told him that was a matter that had been taken care of.

“My express instructions in attending the classes on behalf of then MP Kiema Kilonzo was to ensure I signed the student attendance register so that he got at least 75 percent attendance score in order to qualify for sitting the University exams,” Mutinda’s explosive affidavit reads in part, a matter that would immediately attract the attention of investigative agencies such as EACC and even DCI.

When the University published the graduands’ list in in November 2011, the former PA says Kilonzo ordered him to handover the Student ID, claiming he needed it so that he could collect the graduation gown from the University.

The fake National ID is in Mutinda’s possession to date.

The former PA said that on December 2nd, 2011 – on the day of the graduation, he escorted his boss to the Chancellors’ Court at the UoN where he was conferred with the master’s degree that he did not study for.

For all practical purposes, it is Mutinda who should be awarded that master’s degree.

Curiously, Ambassador Kilonzo was admitted for the master’s degree programme on September 8th, 2003, one year before graduating with his bachelor’s degree in political science.

Mutinda says that his boss picked him as a perfect candidate for this academic conmanship because he- himself was a political science graduate of the same University.

The former PA said he has searched his conscience and found that he needs to come out so that he can help redeem the glory of university education and also to alert the authorities on the loopholes being used by crooks to acquire bogus degrees.

Mutinda’s lawyer Musyoki Kimanthi has written to the University of Nairobi detailing the fraud as told by his client and calling on the university to revoke the irregularly awarded master’s degree and redeem its integrity as the cradle of academic excellence.

“I have reflected over this matter and decided to raise the issue as a whistleblower. My aim is to ensure that the integrity of the University of Nairobi and indeed Kenya’s education system is protected,” Mutinda said. 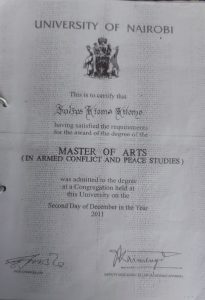 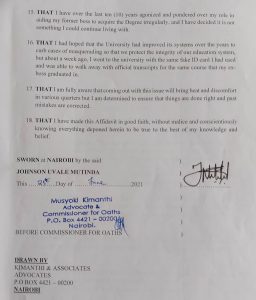 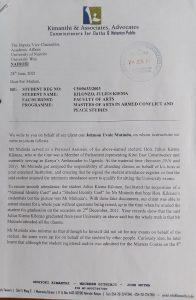 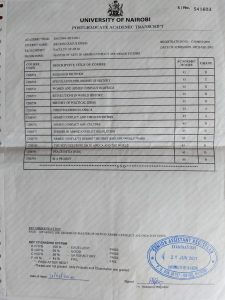 He added that his desire is to help the University correct past mistakes.

His lawyer Musyoki Kimanthi said his client should not be victimized at all since he acted in good faith as a responsible citizen who was preyed upon due to his desperation to retain his job.

“The credibility issues raised over this matter are so weighty that they cannot be wished away,” said the Lawyer.

This year, Mutinda went back to the university and using the fake national ID with the Ambassador’s details, he was able to get the official transcripts for the course his boss purportedly graduated in.

The University’s Deputy Vice Chancellor in charge of Academic Affairs Professor Julius Ogeng’o said the matter is under investigation, after receiving Mutinda’s confession, saying proper action will be taken.

Read the affidavit below…

Beko joins forces with Water.org to provide 10 000 Kenyans with access to safe water