He said if elected, he will ensure the surrounding community is considered for tenders in the College.

Campaigns for the Kitale National polytechnic officials intensified over the weekend with opinion polls showing a tight race between Eliud Mukaisi Amakicha and Messi Messiana.

The two are among those vying for the Polytechnic’s Presidency.

An opinion poll by Hot News that interviewed students in the college, Kipsongo, Premium, St.Dorcas, Shanti and Lavington where most of the students reside shows Mukaisi was leading with 39 percent.

He is followed closely by Messi who had 29 percent while others each scored below 10 percent.

Those who were interviewed said they preferred Mukaisi because he is knowledgeable with the plight of the students since he is a third year compared to Messi who is only a first year.

Mukaisi supporters said he will push the administration to improve student’s welfare.

On Friday evening, Mukaisi’s convoy crisscrossed Lovington,Kipsongo and premium where he urged  students to elect him.

He said he will push both the welfare of the students and the stakeholders in the college.

“I will ensure there is a cordial relationship between the institution, the community and the students” Mukaisi said.

He said if elected, he will ensure the surrounding community is considered for tenders in the College.

He said together with the school management, he will convene a meeting with landlords to ensure that students who reside outside the college get good accommodation.

Messi on the other hand said being a first-year student does not make him a lesser competitor.

He said he is a competent leader.

On Saturday, the two with their supporters crisscrossed Huruma,Mitume and Matisi.

Elections will be held on Tuesday at the institution which will also see each of the eight departments have a Governor.

The College President will earn kshs 10,000 salary among other benefits for a year. 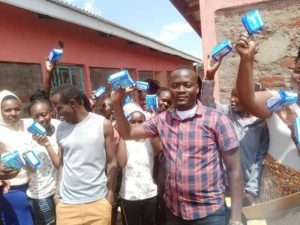