“We would like to reaffirm that the Grassroot leadership structures in Trans Nzoia County is still intact and no changes have been made,” said Eseli in the letter to Wetang’ula’s faction.

Ford Kenya leaders and grassroots officials in a dance at Chris Wamalwa campaign headquarters grounds in Kitale on Sunday...

Peter Puka was ousted from the Chairmanship of Kwanza constituency and Anthony Sikulu Saboti.

Kiminini MP Chris Wamalwa said the changes were in line with the political party’s act.

Wetangula and his group held a meeting at Chris Wamalwa’s gubernatorial campaign headquarters in Kitale.

However, late on Sunday evening, the David Eseli faction released a statement dismissing the changes.

Eseli faulted the venue where the changes were announced and said the proper channels were not followed.

“We would like to reaffirm that the Grassroot leadership structures in Trans Nzoia County is still intact and no changes have been made,” said Eseli in the letter to Wetang’ula’s faction.

Ford Kenya lawyer Benson Milimo said Patrick Simiyu who is his competitor for Cherangany seat was ousted because he is a County Chief of staff.

Sikulu and Puka are said to have aligned themselves with Kanduyi MP Wafula Wamunyinyi’s faction.

MP Chris Wamalwa insisted the move will enhance sanity and commitment in the party.

He urged the new interim officials to work harder in recruiting new members.

Wetang’ula asked members to support his partnership with ANC leader Musalia Mudavadi and ensure one of them ascends to the presidency in 2022.

“I want to thank you because you have given me  the mandate to run for President, but we have to bring other friends on board, if I will be the best candidate in Luhya Nation then my brother Musalia will support me, and if he is the most preferred,   I will support him “said Wetang’ula. 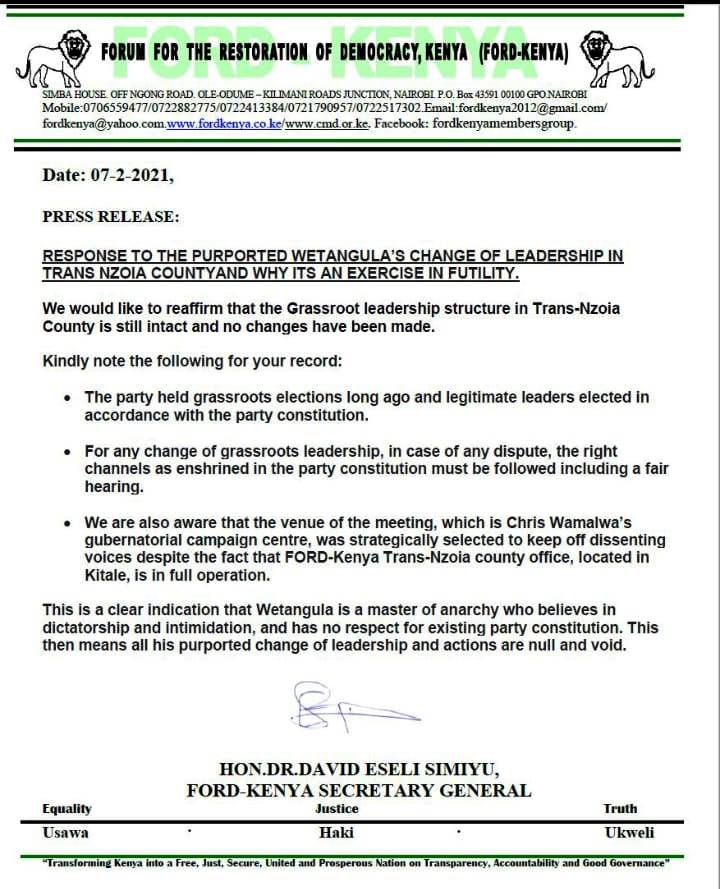